The Void and the Tingleverse 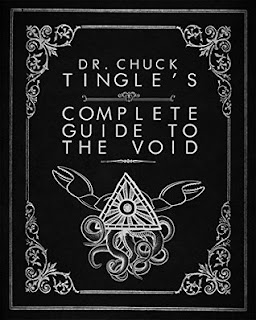 But there appears to be a darker side to Tingle. Threatening his loving and tingly Tingleverse is The Void. It is a dimension that is so totally terrifying just the mention of it can lead one to Void Madness, a condition that does not sound pleasant. Dr. Tingle wrote this brief 69 page work to help us recognize the dangers of The Void and to prevent being consumed by it, a place very few escape from. He tells us of the terrible creatures that come from The Void and gives some specific examples such as an especially vicious form of "Shrieking Mass"...

Throughout history, there has been several Shrieking Masses who greatly affected the course of humanity through their manipulation of humans. In recent history, the most notable Shrieking Mass is United States President Domald Tromp, who attained power despite the fact that the seams in his human suit remained clearly visible during his entire campaign cycle.

So what to make of this "guide"? Despite Tingle's endless admonition to be careful reading this book less you "succumb to the call of The Void", it is consistently humorous. I do not know if this is a companion book for fans of his novels or simply a sidestep into silliness. But it is entertaining and may cause me to take a look at one of his novels, butt pounding or no butt pounding.