Dinosaurs in the Amazon

Monsters in the Clouds 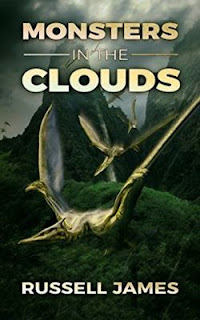 Grant Coleman is a paleontologist with a best selling novel and a greedy ex-wife. What few people know is that his novel is actually a true story about a cave in the southwest with huge scorpions, giant bats, and other creatures. He wrote it as a novel since he is afraid that making the unsupported claims of what he actually found would not bode well for his reputation. Thana Katsoros, a shady employee of a exploitative energy company (is there any other kind in novels like this?) enlists Grant's help using monetary encouragement and blackmail. They are going to check out an area in the rain forests of the Amazon that may still have dinosaurs or other supposedly long extinct creatures. Grant is hoping for a new discovery and excitement but doesn't necessarily want to relive the terrors of his last adventure. Of course, that is exactly what happens. It doesn't help that the trip isn't really what the organizer said it was and it doesn't seem to matter to her if some of the participants don't return.

Monsters in the Clouds is the second novel by Russell James that feature the amiable and somewhat harried paleontologist. The first, Cavern of the Damned, is a exhilarating mixture of giant monster movies and Jules Verne-like cave adventures. In this second book the author appears to be channeling a little Arthur Conan Doyle of The Lost World variety. Indeed, Grant feels like a bit of a stand-in for Professor Challenger although Grant is a likeable, less explosive type than Doyle's hot tempered protagonist. The similarity to The Lost World quickly dissipates though, mainly due to a more modern corporation conspiracy theme and the addition of a mild love interest for our paleontologist. Just like the first novel this is an equally fun ride that evokes the early pulp novels and those grade B horror movies with monsters and big creatures that shouldn't be big. Grant Coleman is a bit faster on the clever comebacks here and it suits him. There is an interesting array of companions for him to play against. A few are simply fodder for what attacks them but enough have an important role in the on-going tension of the book.

These Grant Coleman books are a hell of a lot of fun. Again, James places enough science in it to avoid a total pulp feeling but still remains quality pulp adventure. There are a lot of thrilling action segments. The one that sticks with me the most involves a jungle bridge that has a surprise to it. Monster in the Cloud qualifies as pure entertainment. That may not sound like much but how many novels have you read just for the visceral escape quality. Anyone wanting to write a horror or science fiction based adventure novel could learn something by either reading Cavern of the Damned or Monster of the Cloud. Despite a rather open ended conclusion that screams novel three. I still highly recommend this to any lover of adventure and monsters.
Posted by Unknown at 9:57 PM