Life and death in Baghdad 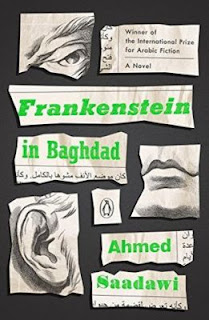 Hadi is a junk yard dealer living in one of the most ravaged areas in war-torn Baghdad. He is an eccentric man known locally as a teller of tall tales aka "pathological liar" but his latest story may actually be true. He has taken to scavenging for dismembered body parts of the war victims to make a whole "person". His vague objective is to deliver it to the authorities as a form of anti-war protest. But when the sewn together body comes alive the creature has his own mission; to avenge the deaths of those persons that now make up his animated form. Soon after his creation, reports of killings rise and are attributed to a grotesque looking individual who cannot be killed. Many people take an interest in Hadi's story including a reporter named Mahmoud and a brigadier general who seizes any opportunity to play the various factions of the unrest against each other. After all, is Whatitsname, the name Hadi gives the monster, any less horrific as what takes place everyday in Baghdad?

Frankenstein in Baghdad was written by Admed Saadawi in 2014 and won the International Prize for Arabic Fiction in the same year. The first American publication occurred in January of 2018. While promoted as a horror novel, it far surpasses a simple genre. The reference to Shelly's Frankenstein monster is obvious but it is not the horror of the monster that takes center stage here. While Whatitsname is extracting the life from his victims, the range of terror and atrocities stemming from the war overshadows anything he could possibly do. Saadawi's novel has a a large quantity of characters. The "cast" list at the beginning of the book certainly helps keep them straight. It is essentially their story and not the creature's that is being told here. The "Frankenstein" of the novel pales to the atrocities of war and the resulting corruption on all sides. The author uses the Frankenstein legend to tell his own story and that is the story of the deterioration of Baghdad and its residents in the midst of an unending civil war.

Make no mistake. This is an anti-war story. Yet our monster is a sufficiently odd and unsettling one. Like the original Frankenstein, he is not always sure of his existence and purpose. Different people see it in different ways from his "creator" Hadi to a grief stricken neighbor to the madmen who become his assistants. Evil is everywhere in Sadawi's book but not always distinctly defined. I suspect that is a given in the war torn Baghdad of the 21st century

Frankenstein in Baghdad may be billed as a horror novel but it is man many non-fiction works. If I had to pigeon-hole it, I would call it a dark satire. There is much humor here but it is humor steeped in misfortune and misery. This is literary horror at its finest and one that should be read and appreciated way beyond the genre of horror. It may also be the best anti-war novel I've read in ages. This is an important novel and I do hope it is given the attention it deserves. The fact that this debut novel appears on the 2018 Man Booker International shortlist is an indication of its literary power. Do place this on your to-read list even if you are not necessarily a horror fan. This book may speak to you on a whole different level.
Posted by Unknown at 4:29 PM