The land between crime noir and horror.

Rage and Redemption in Alphabet City 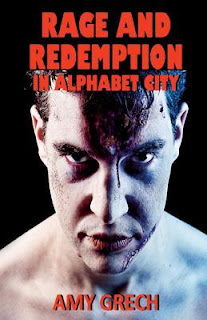 Amy Grech may be called a mystery or suspense writer if we go by the conventional use of the term but it is a label that doesn't quite make the grade. There is very little mystery in these five tales between the covers of Rage and Redemption in Alphabet City. It might be better to call her a writer of dark suspense bordering on Crime Noir. But here is the thing. Grech's fiction doesn't really fit into any buttonhole very well. Her tales are indeed dark. So dark that they inhabit a limbo between horror and suspense. They are stories that tend to be heavy in dialogue which acts like a lure to bring the reader into a very bleak world filled with protagonists with very disturbing minds. The characters in these tales are often like car crashes waiting to happen and we all know what they say about watching a car crash.

Take for instance the title work which is also the longest piece of fiction in the collection. It is essentially a novelette broken into seven parts. It starts like it is going to be a fairly typical murder and revenge tale. Then we meet the characters . We become akin to uncomfortable eavesdroppers or peeping toms. By the time it is through, we are not really sure who the real villains are or how deep we have dropped into the madness. It is both an uncomfortable and exhilarating feeling.

"Cold Comfort" explores the seamy side of sex play when the safe words are off and the players may not know their roles. The first characters you meet are named Jack Masoch and Sadie O'Grady which may give a hint where this sordid tale is going. It is rough and gritty, it is also a bit of a parody reminiscence of a cross between 50 Shades of Gray and Fatal Attraction.

"Prevention" may be my favorite story. Compare to the others, it has a fairly simple plot and twist but is no less shocking. It concerns a familiar refrain in families that goes, "Mom always liked you best", and takes that resentfulness to the extreme. It is vicious, nasty, and maybe a little endearing in a perverse way.

What all these four tales have in common is a snapshot of an inner city that is rough, dirty, and unforgiving. It's inhabitants are not the type of people we want to meet and their problems are not the kind we would want to have. It is uncomfortable. scary, and disturbing but still contemporary to our times, hence believable. That is why the last story fails. "Hoi Polloi Cannoli" is more of a post-apocalyptic tale that appears to echo Shirley Jackson's "The Lottery" then goes off on its own. Yet it feels out of sync with the first four works. Add on the feeling that the twist in it is a little too familiar to the other tales and it loses a lot of the edge. I might of liked it more on its own. Here, it feels anti-climatic.

Nonetheless the first four works of short fiction are quite a treat. They are somewhat nihilistic gems of suspense yet often adds more than a little black humor to the mix, especially in "Prevention". This collection will appeal to the reader who enjoys either dark crime stories or horror. They are a nice mixture of both yet manages to find it own niche, which is probably in a very dark alley in the worst part of town. It is better to visit niches like that in the pages of a book than in real life. Take my word on that.
Posted by Unknown at 11:39 PM